Discussing, modding and troubleshooting the greatest unfinished sequel ever!
3 posts • Page 1 of 1

You don't need to use Carstockalypse or Mapstockalypse. It is very easy to do manually, all you're doing is copying and pasting text.

Rename your DATA.TWT to DATA.TWTbak so game won't use it

Open the .C2C that came with the addoncar with a plain text editor. Copy what's in it.

Open OPPONENT.TXT and paste what was in the .C2C file at the end of the file right above the word 'END'

If you're adding a car, go back to the top of OPPONENT.TXT and increase the number by 1. If you're replacing an existing car and not adding to the total number, leave the number at top alone.

Open .C2T file that came with the map with a plain text editor. Copy what's in it.

Open RACES.TXT and paste over an existing level with what you copied. (you can't add to the nmber of levels, you must replace an existing one) 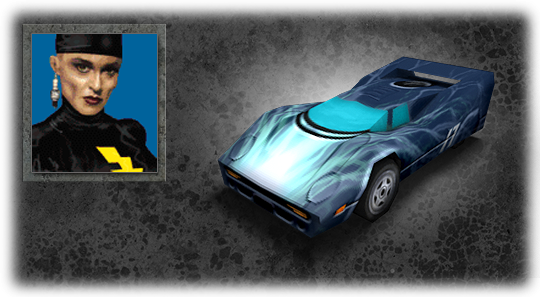 Thanks for that! As a Mac user with a ciderised copy the inability to use Carstockalypse has been bugging me, but I did finally work out the cars thing more or less for myself by looking at the tree structure of typical car downloads and duplicating it into the main structure, and by checking out a few read me files (and thanks to the fantastic community of car modders and builders, I've had such a laugh the last few days, taking on a Star Wars Tie Fighter with a Lada amongst other things - and getting my arse roundly kicked of course but you have to try :-)

Actually, have you covered the whole process there? Talking Mac here ... the new car download folder (once unzipped) usually comes with two subfolders, CARS and INTRFACE - I've been adding the *carname* folder inside downloaded CARS subfolder (or sometimes just a single TWT file) straight into the CARS folder in the main game hierarchy, and putting the *carnameCI* folder (or TWT) that's inside CarImage inside INTRFACE, into the corresponding place in the main hierarchy (and the same idea with additional sounds if they're supplied). Then doing the OPPONENTS txt file copy'n'paste you mentioned. I'm not sure if you oversimplified slightly? Or am I overcomplicating? Anyway that'll help any other Mac users who want to fiddle hopefully, I know it took me ages and lots of digging about to suss it.

The Red Baron's one of my favourites by the way - a handy little car, beautifully rendered in V2, for fighting or just chasing checkpoints, very hard, very fast and very sticky (to the road, nothing to do with the Fraulein driving :-)

It's also good fun modifying other little bits and bobs once you get the hang of everything in the game being referenced to calls from easily understood plain text files and know where to look and what can be dicked about with safely (always retaining backups for when it goes wrong!) It's trivial to alter powerup durations and availability across the whole game (just those few extra seconds on solid granite car! While I find something to kill!), numbers of opponents by editing the first bit of races.txt (so every race can be a destruction derby), and my favourite, modifying the mutant tail thing to 10 links and a bit lighter than standard (this is hilarious - not only does it flay peds more efficiently, it also unceremoniously yanks your car into the air if it gets caught on a tree). Also changing the YON parameter so you can see more or all of the landscape or opponents at a greater distance (handy at the airport when you're going almost supersonic down the runway after giving the Tie Fighter a sniff of turbo nutter nitrous), although messing with that tends to crash it occasionally - presumably a graphics or processing overload issue?

Done a few ped additions too, they're easy enough, and digging into the text files for peds you realise just why this game is so f***ing funny - because the programmers were all patently laughing their nuts off every step of the way. Let's hope the same irreverent, "f***it let's have a laugh with this" spirit is still at work for Reincarnation. While the new visualisations and concept art are all very nice, Carmageddon is and has always been about sheer balls-to-the-wall gameplay and no matter how pretty the new one looks, it has to have that same combo of the mad adrenalin rush combined with laugh out loud moments. That's why a 12 year old game is still utterly playable and fun.

Just as an aside to that - I wonder if Stainless had produced Grand Theft Auto, would they have kept the Hot Coffee bits in or bowed the knee to political pressure? I kind of like to hope they would have given the establishment a solid middle-finger salute :-)

And hopefully keep it as open to the modding community as the old one - it really is easy to mess about with the entire game once you get the hang of it (but always remember .... BACKUPS! Easy to get it wrong too).

Next step for me, to try a map mod, once I've thrashed the life out of all these new cars on the standard maps!
Top