carma forums thing?
some mouth breather explaining that since you can't shift gears yourself all the addon cars should be automatics?
just guessing.
i think i have a loggin for the carma forum, but i don't like the feel of it.
maybe i'm old and cranky, or just don't have the patience for the BS.
but the vette looks good. and the interiors have come a long way. for years they were sacrificed on the altar of low poly/not gonna see it anyway/ here is the inside of a box with a photo of the interior lining it. the armrests look like armrests, the seats look like they have bolstering.
looks like a good ride.
Top

Wow, seems like you're already back at full speed?!
Corvette does look good! Might be nice in C1 too!

Those Imp's look real sweet too! Very much dig the colour n the deep rims on the low-rider, real tight build there

The Ocean Is the Ultimate Solution.
Top Yes, its here after all that damn time.

I know I dissapeard for like.. two months watching cartoons, and drawing stupid pics with people. but here I am.. and heres the ZR1

Some changes. yep the interior has been tweeked slightly. I dident like the edge of the seats in the orignal version. as before still coems with 3 versions, top on, off, and glass top, also comes with the red, and 6 aditinal paintjobs, Standurd car comes in bright red with painted hard top.

http://demontailmods.webs.com/c2-cars
Wheels Outside All Shapes
Top 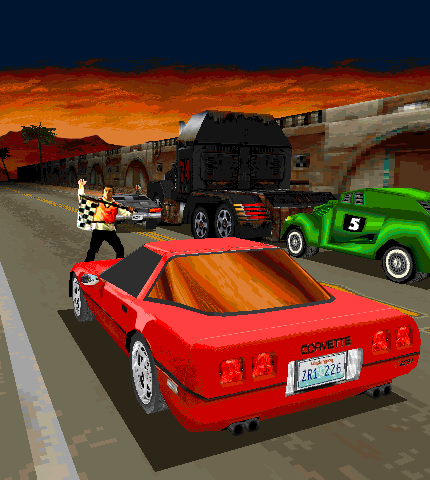 C1 version tested - no problems found (as player and as opponent) :) Only that dark glass... Thank you both for new car :)
Top

Very nice! Great conversion too! Haven't got try it out. Just getting back from vacation.
MacCarpocalypse | coffey.polygonized.com | CoffeyCup's Gallery
Top

So I'm guessing the Ramraider update went the way of the Dodo with the hard drive crash?
Top

Takeshi: well, ya, Im not rebuilding that from nothing.

What do we have today?... stuff

To show im alive heres something im working on, yall may recall the W900 chassis cab I started, well I got 3 versions here for ya,

Carmageddonised Version!
Yes, Im pretty sure the W900 dosent come in simple box truck style, but its a carmageddonised item, so Im sure in the carma world a high power heavy duty truck would be used to transport food and such. Flatbed
Simple, as it says, a flatbed with bricks (or boxes in an alternate skin) Tankerd
The good ol tanker, you know the orignal skin had a green cab and white tanker, but I stumbled across this paintjob on another truck while googling and well.. it jsut looked damn cool to me, so I re-created it. Small note: For some reson the rear license plate on the tanker broke.. I dont know why since it uses the same texture as the front.. but yeah I need to fix that too.

There ya go, Will release soon, still need to:- Make menue image, Simple model, Modify bounding box to acomidate the new loads.
So yeah, when its done itll be something you can actully drive, unlike the low poly models of late.

Ill try get this doon as soon as I can, Also im working on Possibly a carma first, but maybe not, and I also want to try some form of construction equipment. or some old C2 stlye stuff. and I want to make another 30s car, I put little details into the ford I did, and the engine was the best ive made.. so that kinda sucks.. Maybe ill go with the more slanted nose of the later model next time.. make a coupedegrace replica.

Peace!
Wheels Outside All Shapes
Top

And another carma first possibly?

And another carma first possibly?

Dont get too excited, By carmageddon first, I mean a car that I dont think has been made before. There are lots of types of veichles in the world, and well its allways fun to be the first :P like how there was a first snowmobile in carma, a first driveable plane, I actully made the first baggage car :P stupid stuff like that, nothing exciting, no Major C2 world changing stuff.


Anyway here we go. I made some changes,
Tanker now has darker black on cab matching the tank better, The C2 meat truck (alltho not shown in picture) exhaust stacks are now taller so they miss the container, and as show each truck comes with an alternate skin to give it two looks atleast. tho its not a seprate car Just a alt skin, also rear plate on tanker fixed,
Also I fixed my glide so. C2 screenshots look better again, insted of stretched and faded.

So go truck yourselves.

http://demontailmods.webs.com/c2-cars
Wheels Outside All Shapes
Top

Luv dem trucks...
***When I die may I be surrounded by scattered chrome and burning gasoline***
Top

I wanted to test these,but I keep getting the " cant load independant car resolution file" message. Also menu pix not working though I know you included them in the zip.

Not seeing what the problem is off the top of the bat.
MacCarpocalypse | coffey.polygonized.com | CoffeyCup's Gallery
Top

Well I have re-uploaded a zip with a corrected typing error, I used ' In a c2c file, wich causes the game to crash, issue was with tanker.

Other than that, all trucks, menue images, and files, inplace, I tested it in another carma.
Wheels Outside All Shapes
Top

Well, the problem is I'm a retard.
I had unzipped it into one install of C2 and was trying to test it on another.

I did notice one thing, the driver pix for W900C2 wasn't showing.
In the C2C you have GMC instead of MIKE.

ha, well that kinda happens,
No matter how many years you do something, I still leave stupid errors after all this time :B also I have too installed a car into the wrong carma and then couldent understand where it went.
Wheels Outside All Shapes
Top

I was going to do some quick christmas gift kinda stuff, But I got carried away with one car, Orignally I was going to make a quick hotrod, in a DB type style, A coffeycup busty lady, and possibly driveable bus? And a whacky oldskool cration tosh would like, buut.. yeah I kinda turned my quick car into more work than I planned.

This is a genuin rat rod!, Made from random parts around my virtual workshop. I modled the body of a model T, then I re-modled my Flathead V8, allmost in an identical way to the one I made in the 32 ford, I even managed to goole the same parst I used for textures for.. everything except the carbs, wich I do remember were taken from a website with parts for sale, so those pics nolonger exist.

so heres what I ended up creating, a way over the top 1926 Ford woody, Rat rod styled creation I wasent going to leave this in my showroom area, as its not a fully compleate car, It dosent have opening trunk, or a dashboard, or real interior for that matter, so It might be removed from the area... but for now it does look cool in there

building my collection of cars back up heh.

I kinda have a feeling its the kinda thing DB and Coffey would like anyhow? Download at this place here:
http://demontailmods.webs.com/c2-cars
Wheels Outside All Shapes
Top

Nice!
I like it!
***When I die may I be surrounded by scattered chrome and burning gasoline***
Top I wonder how many different addon cars Earl has driven thanks to us!

Euro Truck Simulator 2!
might be boring to you people but its an enjoyable experiance for me, tested it on my new pc over christmas. then I tried carma, hey it works, I allways had issues running C1, but my windows 7 new power pc can run it fine, at a nice framerate with nice (for 97) graphics, so I decided to try making stuff again,

Thats where the ETS2 comes in, it has a nice truck viewer type area, so I got a good look at the volvo I was using, and now you too can use my volvo in your carma, The lights are a little in the wrong place and I only have roof lights not grill lights but I just added them for a nicer effect,

I would describe this truck as 'Good but not perfect' it works ingame nice, it has an interior, but theres no moving parts, The only issue I have is I cant fully hide the mirror, and speedo in my interior view. Ive tried but it keeps crashing the game, so for now this is how the simple non-functinal interior looks.

and I added something folks usually miss, the animated Mugsy shot. and spiny car

Usually my stuff is muscle cars, pickups, and american trucks, so Go download this now before I revert back to Merican ways,
Also im still in the mood so I COULD add a scania too if someone really wants that. since its a nice looking truck too.

[ Razor @ Carmageddon Webmasters Alliance Network ] [ My Downloads ] [ My Carma Items ] [ Conversion lists ]
To download the BETA Mod and more information on my other work, visit me @ https://razor.cwaboard.co.uk
Top

Looks really good in C1, especially those interiors!
Isn't it scaled a little too small?

By the way, yesterday I meant those lines for the rendering areas:

IIRC you have to increase the last values to stretch the rendering areas toward the bottom of the screen.

Very nice Truck, however I see some of errors I found in previous cars... like windows flashing - try to move camera up and move left-right to see. Car doesn't appear as opponent since it 'Strength rating' is set to -1. When is enabled as opponent we often see it bottom, which have same texture as on top. The mugshot animation have white frame which look strange, however animation is great. Too bad description is missing. Other tiny thing - the background of car selection image isn't pure black (on brighter display it is very clearly visible). The mirrors from inside looking big, when outside those are tiny.

If you want completely remove indicators, I think (maybe there is better method) you can create blank - transparent copy of existing one and set it to use.

Thank you for another cool C1 item :)

I made them all.

-COFFEY'S ICE SCREAM TRUCK (Which I modded into a standalone car instead of a sawbones replacement, just by renaming and copying sawbones files but still needs splat pack.)

-TOSH'S CONVERSION OF TTR'S RED BAT ROCKY (Speaking of which, guess what I saw and got for christmas?... MAD MAX 1 and ROAD WARRIOR!, You guys were right, Those movies are the Allatoyah of ROCK AND ROLLAH!)

THE CAR!
CARMAGEDDON 1 ALL DA WAY!

I know its just the internet, and I'm behind a computer, so it'd make me kind
of a tool to start throwing insults at this point.

Alex will you think before posting?
Couldn't you just make your own thread to show your own stuff?
Top

I was saying that not everyone forgets the animated mug...
CARMAGEDDON 1 ALL DA WAY!

By "mug" I think Maxine meant the mugshot of the driver.
MacCarpocalypse | coffey.polygonized.com | CoffeyCup's Gallery
Top

Alex Self A 9 wrote:I was saying that not everyone forgets the animated mug...

That first statement I made sounded a bit harsh, anyway. It just seemed inappropriate that you made an extravagant post just to declare you make animated mugs too. Dont mind me being forum police though.
Top
Post Reply
171 posts

Users browsing this forum: No registered users and 12 guests