The 2016 reincarnation of Carmageddon! Discuss, mod and troubleshoot!
46 posts

For best results, you can copy the contents of the Material (MT2) files from one of the official cars, and then replace/edit the texture names to match your own. You will need an XML editor to edit these files, notepad will not cut it.

“car_shader_double_sided_base” is the only material in the game, which will have blood splatters enabled. On the official cars this is just used on a single material, for which the texture contains: paintwork, all exterior trim (chrome, plastic, rubber), weapons, underbody, engine bay surround, grille, and sometimes the interior.

The material takes in 9 textures (comments for each texture argument are on line below, in Turquoise): Additionally you can disable the double-sided nature of this material, by changing the “<DoubleSided Value” to “FALSE”. Below are some examples (taken from the Monty Carnage) of the 6 main textures (specular maps alpha channel shown separately). I don’t have a unique back-facing texture, so the “Side1_” textures are used in its place. 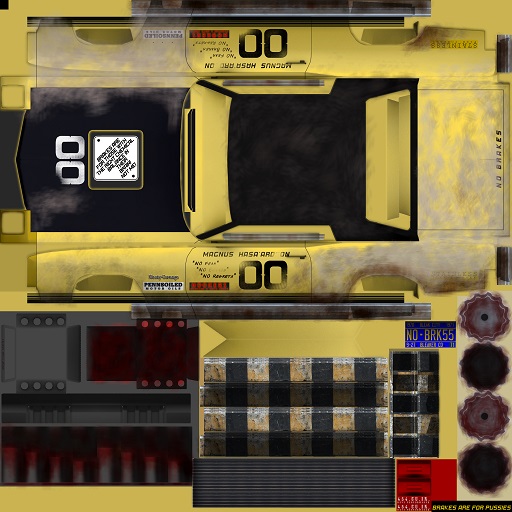 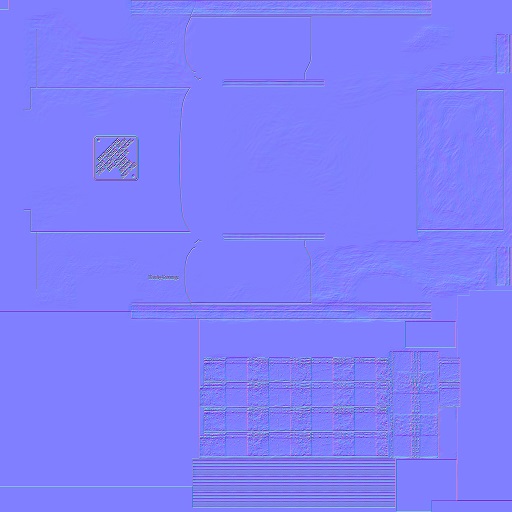 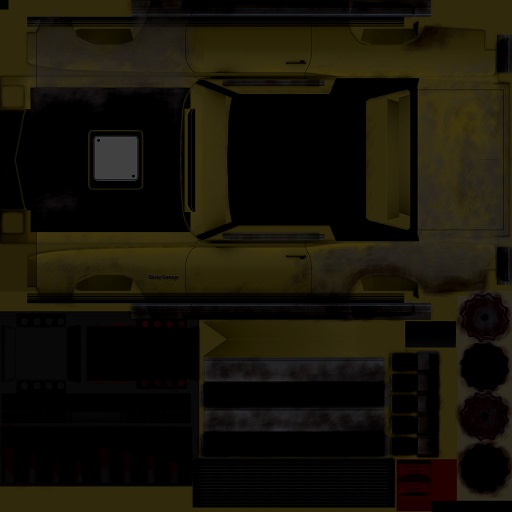 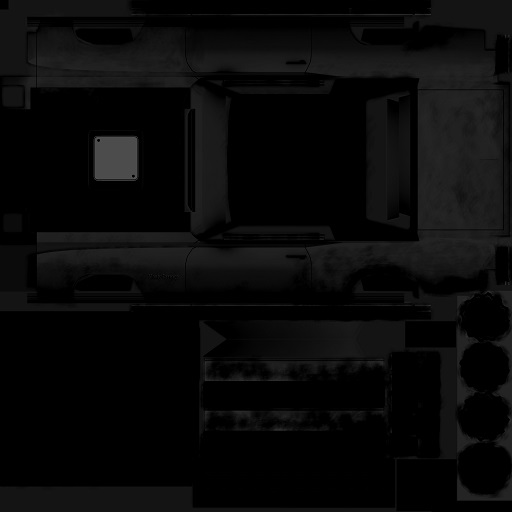 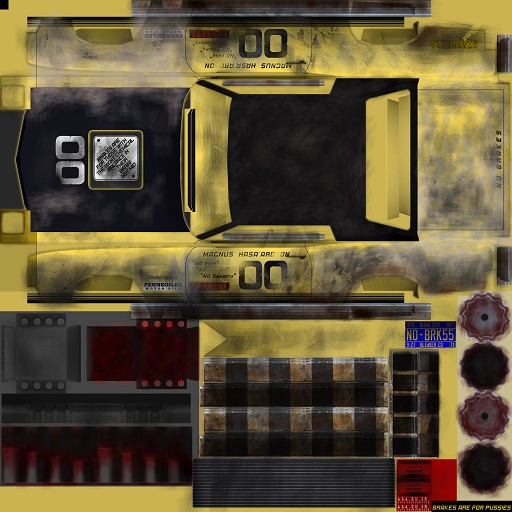 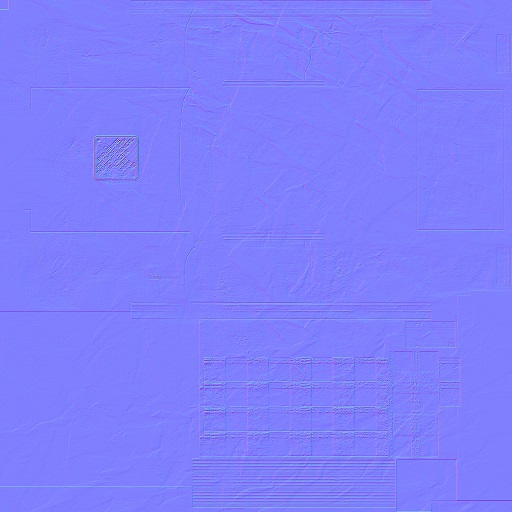 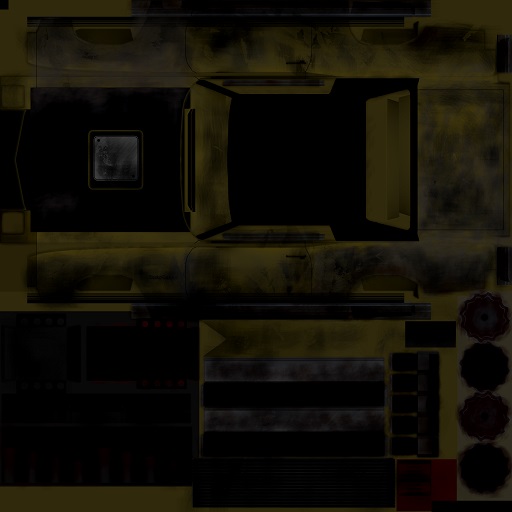 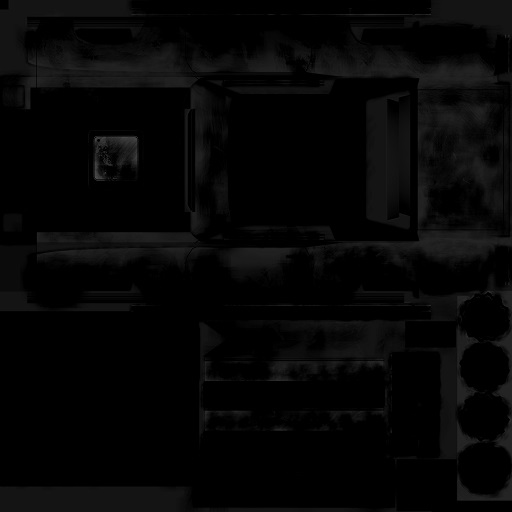 “glow_simple_norm_spec_env_base_a” takes in a diffuse texture (with alpha channel), normal map & specular map and is used for illuminated lights. There are multiplier (Float) values that can be increased or decreased if your lights are appearing too bright or too dark in-game.

“simple_norm_base” works the same as “simple_norm_spec_env_base”, but it seems that the specular map is not used in-game. If you have not modelled backfacing on your tires (like me), then you will need to set this material as being 2 sided with the following command placed on the line below the material type.

Below is a decoded version of the 'Setup.lol' taken from Caddy Fat Cat. this has been broken out into separate lines, with comments below. Comments start with a '//' Prefix, comments in "" are from the games .exe

// This value is multiplied by the torque values defined in the torque curve. This is increased by Power upgrades

// Final Drive/Differential Ratio. Increasing this typically improves acceleration & pulling power at the expense of top speed, but can lead to increased wheelspin depending on the car. Decreasing this usually does the opposite

// Grip Factor for Rear Wheels in Gs. Increasing this will usually lead to less oversteer and more neutral handling.

// Grip Factor for Front Wheels in Gs. Increasing this will improve how well a vehicle turns into a corner, but if rear grip is lower, this can lead to oversteer

// Position of Centre of Mass (Y Axis/height). Increasing this can make a vehicle more prone to rolling over depending on grip, steering speed & suspension characteristics

// Position of Centre of Mass (Z Axis/length), 1.0 is over front wheels, -1.0 is over rear wheels, 0.0 is half way between. The game will automatically level the suspension to stop any rake.

// "Amount of suspension compression due to the weight of the car"

// "Amount of suspension compression due to the weight of the car"

// "Controls how fast the steering is at SteerSpeedVel. Actual steerspeed is interpolated between
this and the steerspeed value, depending on the cars velocity."

// "Controls how fast the steering is."

// Multiplier of Steering Speed for when straightening up. Apparently wheels should return to straight immediately if value is zero

// Percentage of Brake force sent to the front wheels

// Brake Force in newtons, per kg of vehicle mass

// Additional power multiplier for when in reverse gear

// Drag Coefficient, this value is comparing drag against a flat-plane with the same cross sectional area as the car. This can affect the vehicles ability to reach it's theoretical (gearing) top speed depending on how much torque the engine produces

In theory, this would be 1.0 for a boxy school bus or cab-over truck.

// Apparently "prevents wheels from getting turned too much for given speed"

// Apparently "prevents wheels from getting turned too much for given speed"

// Speed at which "steer limit 2" is applied

// Apparently "Controls how stable the steering is. See CastorSpeed2"

// Apparently "Controls how stable the steering is at SteerSpeedVel. Actual castor speed is interpolated between this and the castor speed value, depending on the cars velocity."

// Not Sure, haven't tweaked these

// When enabled, steering wheels will "maintain their world-space alignment", this might give off the impression of an automatic counter-steer

// "When recovering from a slide, this prevents car spinning out the other way."

// Moment of inertia due to drive system (Including gear box, wheels etc)

// Moment of inertia in engine

// "Retardation torque in engine proportional to square of angular velocity"

// "Retardation torque in drive proportional to square of angular velocity"

// "Period of between releasing accelerator and engine braking starting"

// Base vehicle Mass in KG

// This defines the actual gear ratios, the first number is the number of gears that the method takes in. If this number is 10, then it must be followed by 10 values, even if some of them are not used.

// This defines the torque curve, the first value is the number of 1000 RPM values that the method takes in. If this number is 20, then it must be followed by 20 values, even if some of them are not used.

The actual torque values are multiplied by the cars power multiplier, which is then increased by power upgrades to improve acceleration. Torque values are likely to be in NM, as other values in the setup.lol are metric

// Amount of extra grip added to wheels by stability control. I'm not sure if this applies per wheel, or per axle "Amount grip can be adjusted to stabilise car"

// Time taken for stability/grip control to kick in, 0 is immediately, value can be up to 100

Some cars also have the following methods in their setup.lol

In Carmageddon Max Damage/CMD. Wheel models are stored externally from each car. This allows users to setup & use different sets of wheels on cars (available wheels on each car are defined in the 'Vehicle_Setup.CFG').

In CMD, while the Rim models will rotate, the tire models do NOT rotate, instead the tire texture will scroll in the Y/V Axis to match the wheel speed.

I usually use 48 Steps for regular car tires, and have used 96 Steps for the tires on Big Dump R as they are so huge.

With the tire texture animating in the Y/V axis, this means that your tire model will need to be un-wrapped as a strip, like below 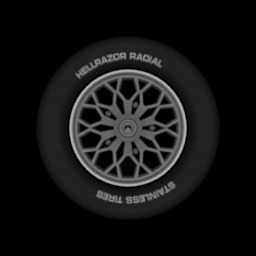 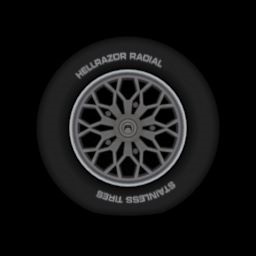 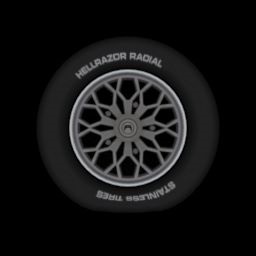 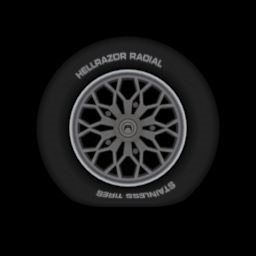 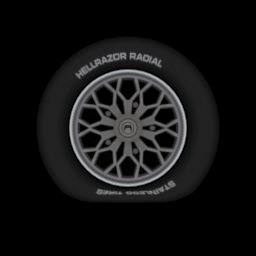 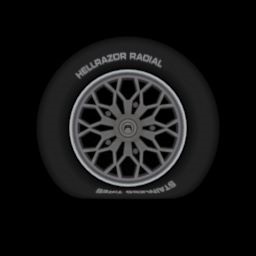 When you open 'CComplicatedWheelParameters.LOL', It will look something like this


Then update your vehicle using MINGE, and add the wheel as a 'required mod'.

If you want to use different wheel models for each wheel, then the wheel map will look something like this

Then update your vehicle using MINGE, and add the wheel as a 'required mod'.

This error can have one of at least two causes.

Cause 1 - Failed Texture Conversion
Sometimes this error will pop up when you export your vehicle and have enabled 'Convert Textures to TDX'. If it fails to convert the textures it will generate this error.

This error means a mesh is missing a vertex colour channel. You should make sure that any vertices which aren't used for welds or the driver box (green, red, blue or purple as the common colours for those) should be set black with the alpha set to 1.0
__________________________
3] DotNet Error Message when launching the Maxscript

If the following error comes up when you run the maxscript:

To remove this message, you will need to make a change to the "3dsmax.exe.config" file, which can be found in the "3dsmax XXXX" Root directory (where XXXX is the year of your version of 3dsmax).

Open the config file, and add the following code to the configuration:

When setting up & testing your cars in CarMODgeddon, you may find it is difficult to balance the stock performance & strength of your vehicle with the official cars due to the automatic APO upgrades applied to the AI drivers, which match the upgrades you have unlocked in the career rather than the APO upgrades on your currently selected vehicle, especially if you do not have any spare upgrade tokens to upgrade your car.