A place for all things Bangers! Seduction of Destruction! Fun!
8 posts • Page 1 of 1

Hello people!,
so what happend last time? well I started to make a mod, an updated S.O.D improving little bits on the maps, adding props, higher res textures, and Vans, so it was a van demo derby mod. and well it die, with my hard drive, I have lost the motivation to do it. mainly because I was allmost done.

US Style Demolition Derby!
Yeah, basically Im going to redo SOD (again) keeping the maps, and missions Mostly intact, clearly with some changes to missions, keep the layout of the map mostly the same but add an american feel, Im just making up fictinal tracks here, in random states, so I can do all diffrent scenery types, Expect to go from the green countryside, to the desert, to the big city in your racing carea. Also, there will be unlockable bonus cars at the end just like the orignal game, for people willing to play thru, Trust me you should, itll be fun, S.O.D Was.

So lets take a look at the first track in Colorado.
Oh look, ive found somewhere to actully use my junk cars :D 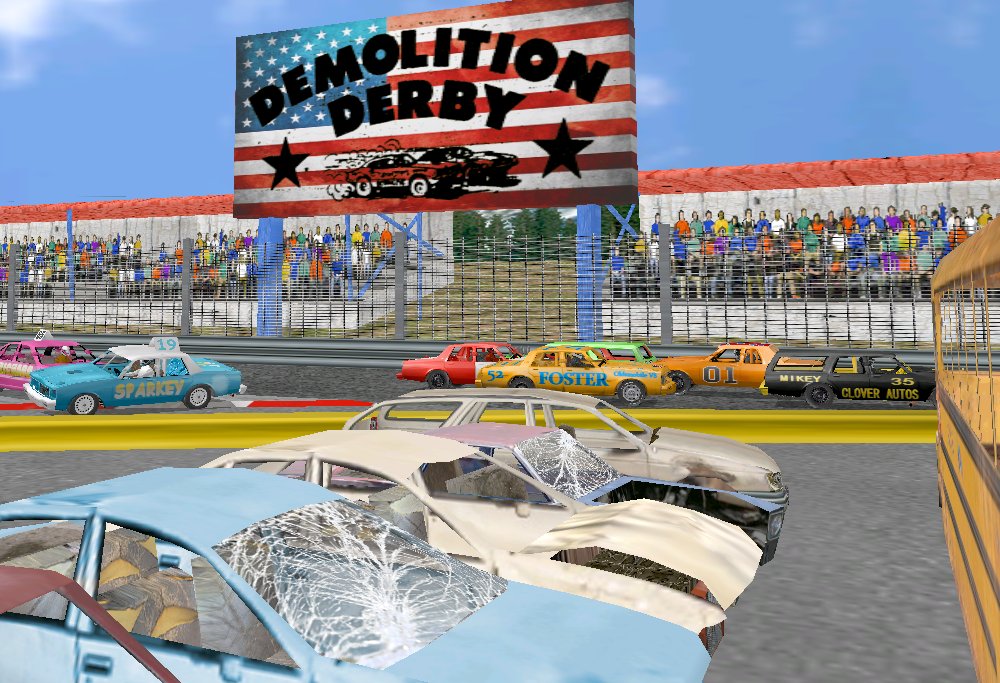 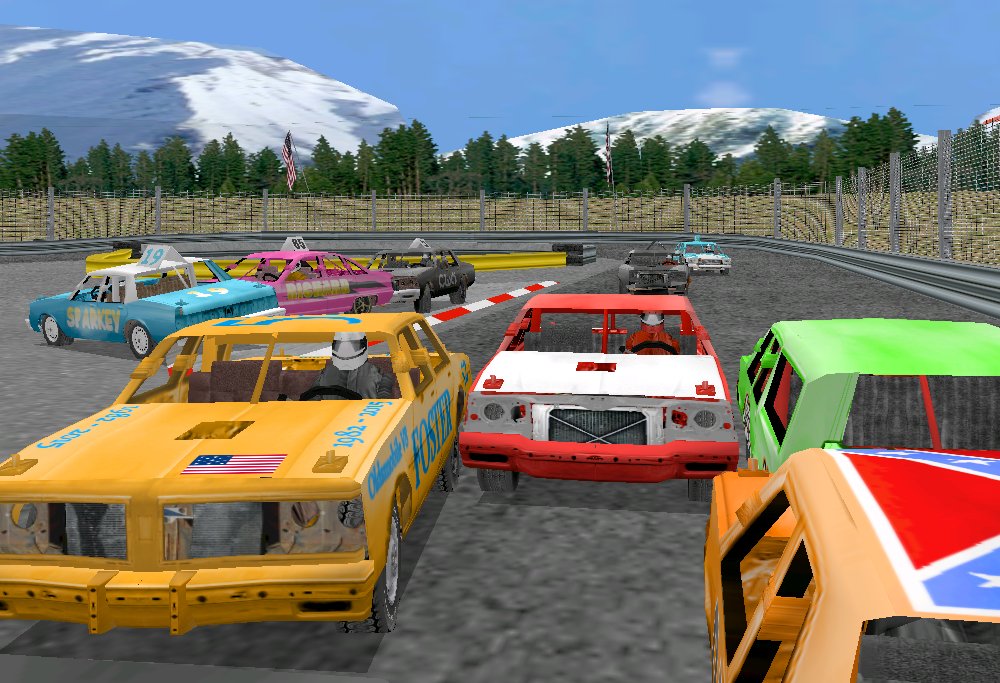 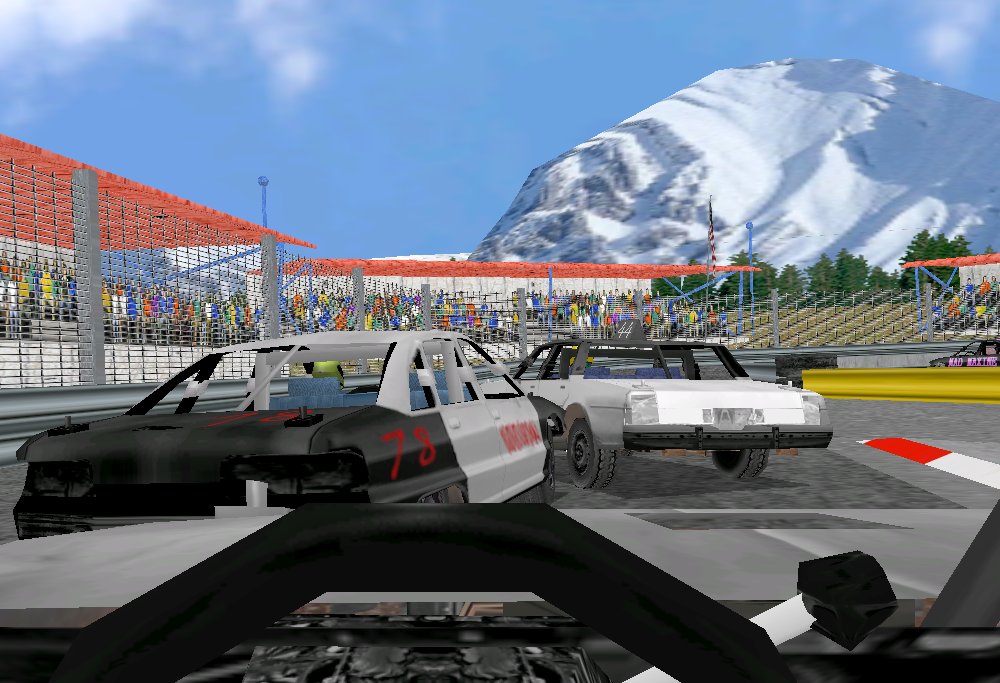 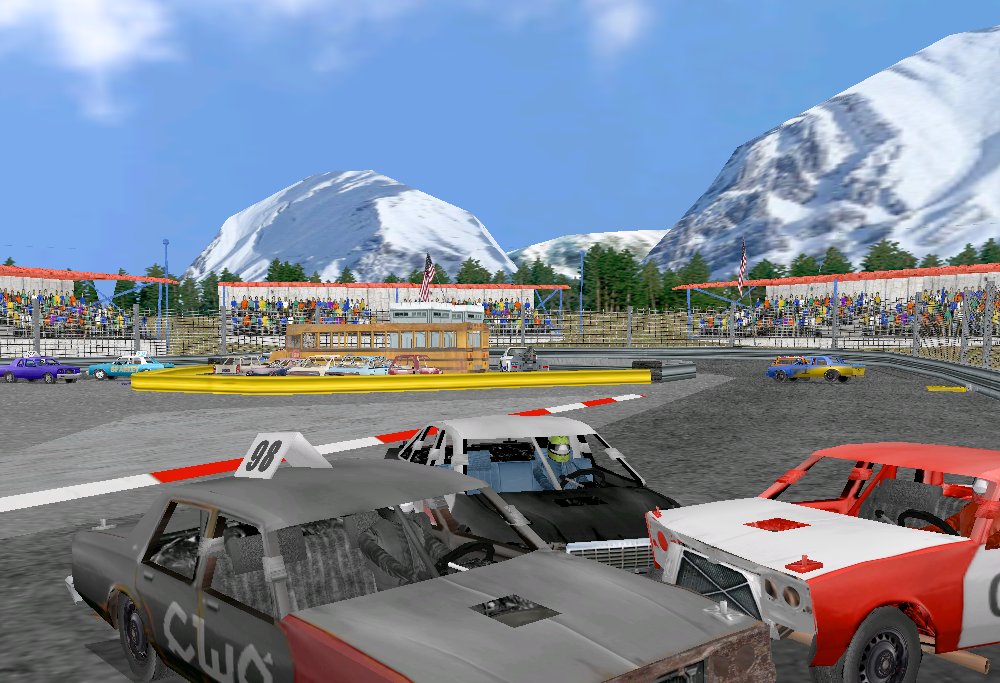 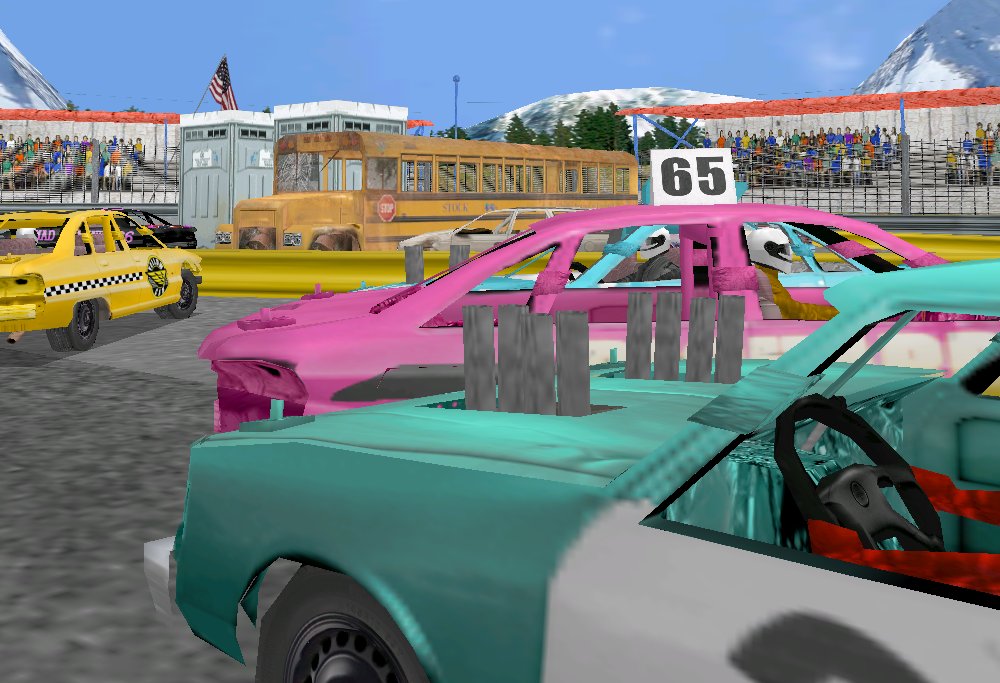 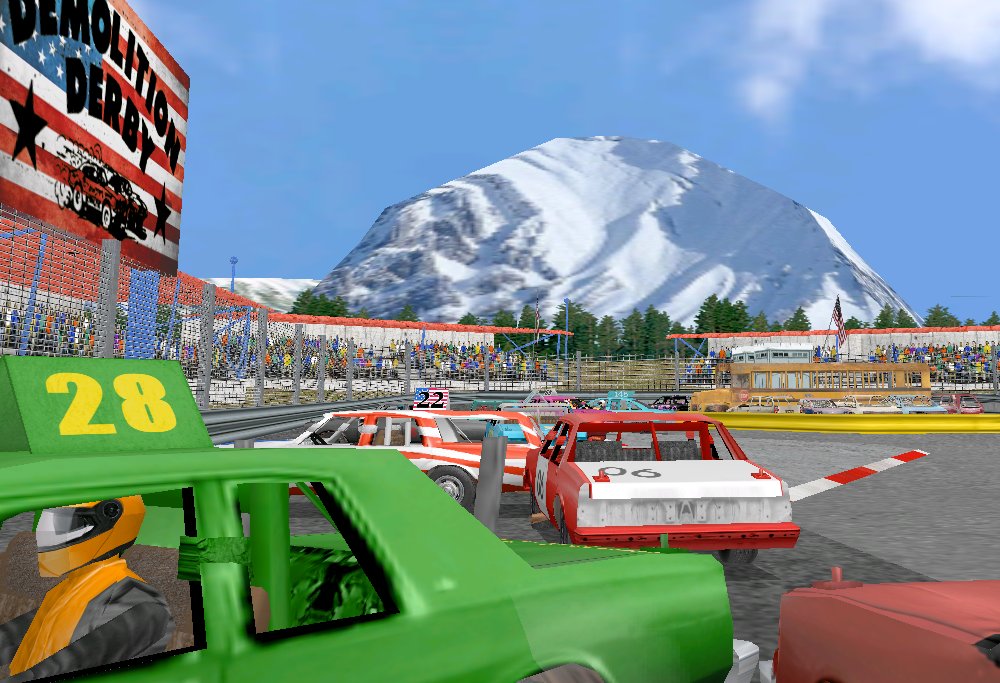 I Freakin Love making scenery,
So yeah, same as last time I modeld some simple background stuff and turned the yon way up, Expect lots of americana, us flags, and other cheesy crap.

Oh right, yeah I should add little notes at the bottom here.
There is still a very limited amount of cars ingame, any car enthusiasts out there? you may be able to see what kinda cars and variants ive added sofar,
Even tho some of the cars im planning to use allready exist, im sticking to my honisty policy of Modling everything in this mod myself, I just like everything to be uniform and the same style (pluss some models might make mine look like crap) so yeah Ill be remodling another one pice body crown vic, even tho a good one allready exists, also cars are not 100% accurate, I try to research what behind all the trim looks like the best I can, by looking up pictures of striped cars, junked cars, and sometimes cars in accidents, to get an idea of how to set out the frame for the radiator, headlights, etc, sofar its going kinda ok But there will be mistakes, so id apreciate no 'The rear end of a 92' roadmaster dosent have that style hole behind the rear lights' etc, Im not expecting that from you guys :P but just sayin.

Also TIMMY!, if you are out there, or any other S.O.D fans, im planning on making a british banger car for yall, because I do like to give at times :P I get to build something, and people get something nice,
So what car would you pick? I Could do a capri, or a cortina, or the newer version of the granada, or whatever your little crumpet eating hearts desire :P because Im really in the mood making these things again

Peace for now all!
Wheels Outside All Shapes
Top

Wow that looks pretty spectacular! So you made the track too? Are those actual 3D mountains? They look too good to be a blurry horizon pix.

Well the track is the first track from S.O.D All the maps are going to be modified S.O.D maps, its kinda gona be just a rebuild of that with nicer textures, and new cars, so the whole thing will hopefully feel new, I might move around the order of some of the maps. and get rid of one that feels a little odd. Ill also try model an areana for DD style stuff, but I have no idea how to set opponent paths, thatll be a pain in the butt.

The map its self is still the same base shape, its been retextured, and some models have been added in the center, such as the cars, flags, etc, The grassy area has been replaced with a crash barrier, because cars were launching themselves into you from the top and it was just getting irritating, The stants have been remodled with people and such, the grassy area, trees, and mountins around the map are just low poly models and textures in the distance, With the yon turned up you can make some nice low poly scenery that looks great from a distance.. I cant wait to make a city map.

Here is a comparison to the orignal next to the modified version. 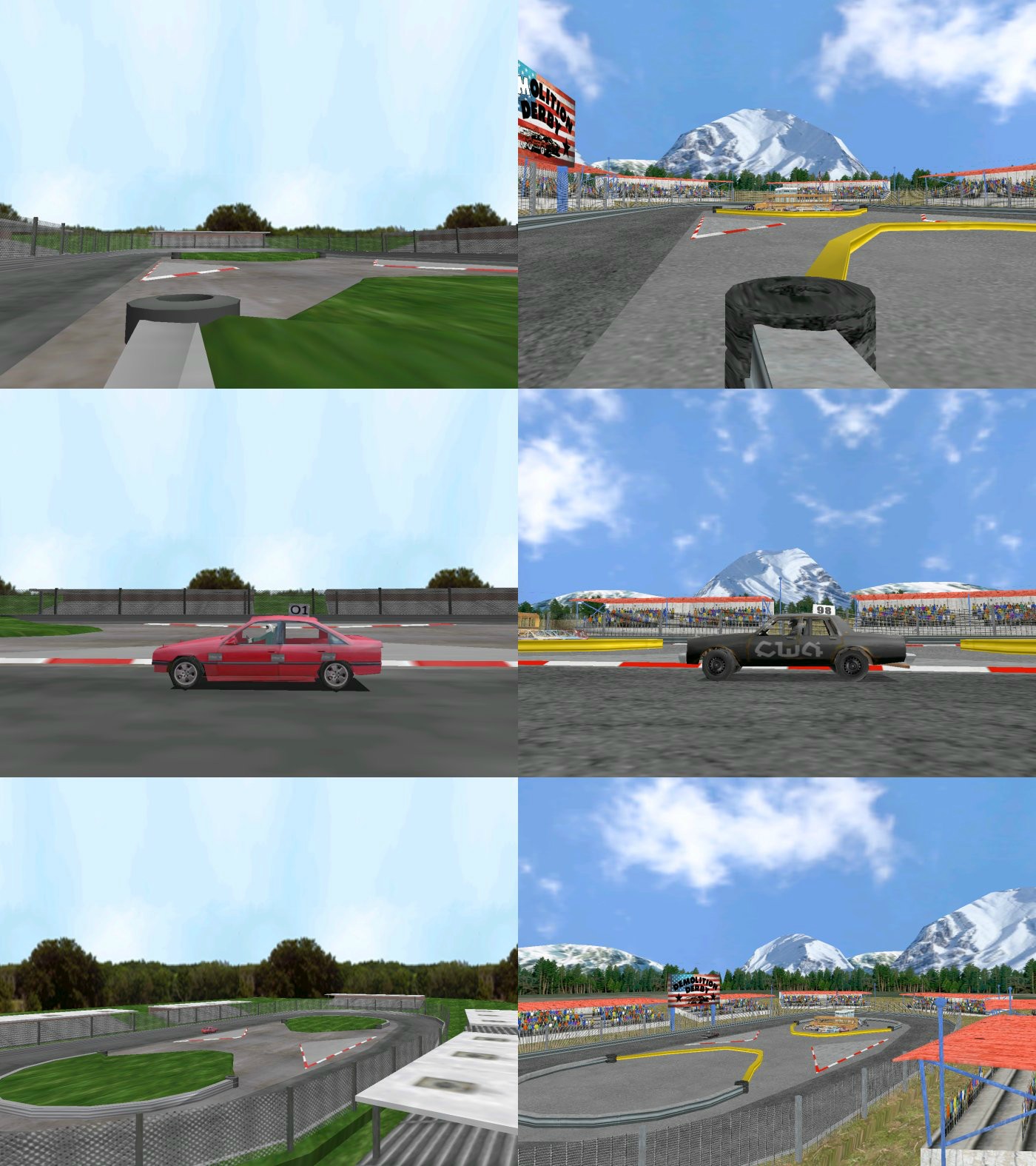 This is a great way of making track maps, bout wouldent really work in free roaming,
I also plan to have roads, with drones as traffic, trains, to give distant movement. It worked really well on my truck yard map, wich was unfortunatly lost. so I plan to do that, Tis fun :P It just gives so much atmosphere. moving traffic and such makes you feel like you are mroe in a world.
Wheels Outside All Shapes
Top

Great stuff, Max. I hope this is one you finish as I do love a bit of S.o.D now and again, would be nice to have an updated version.
[ Razor @ Carmageddon Webmasters Alliance Network ] [ My Downloads ] [ My Carma Items ] [ Conversion lists ]
To download the BETA Mod and more information on my other work, visit me @ https://razor.cwaboard.co.uk
Top

This is all looking nothing short of awesome!
Looks like an american version of SOD.
You're as prolific as ever, uh?
Even a CWA sponsored car.

Oh, if you need me to, I can make opponent paths, for an oval track they're pretty simple to whip up.
MacCarpocalypse | coffey.polygonized.com | CoffeyCup's Gallery
Top

Tosh: Thanks :P tho as of late I feel like I havent made much progress, ive been tweeking menue stuff, sounds, txt file stuff, and just genral tweeking little things, the game feels diffrent for me, but if I took screenshots youd be hard pressed to SEE the diffrence, oh and the CWA car, was kinda the car you start with.. but I kinda downgraded, yeah now you have to start with a smaller, front wheel drive car with less weight.. I was playing thru with the caprice and it just felt a little too easy in the first maps, I wanted the need to unlock more stuff.

Coffey: glad ya like the track changes, they are fun to do,
the background stuff was modled in Cared, and imported via pt2, then stuff some of it replaced such as the old stands, etc, were removed in pt2, lucky for me S.O.D maps have all the partsseprated still in PT, so its easy to move, or remove little bits that have been remade.
Also ill try opponent paths myself at some point, most likley ill just morph some of the orignal maps into arenas anyways.

If yall havent spotted, I made a topic at the other carma site, heres some stuff I posted there.

Finally! I figured it out,
Something was bugging me about the caprice, something did not look right, It was the damn wheels, I did not really think about it at the time but I just stuck on the steel rims I did for the astra van for the british version of the SOD mod, these steel rims looked modern and just dident sit right.
So here, I used actual 1977-90 genuin caprice steely rims :P

Day progression textures, if ya play in order that is. 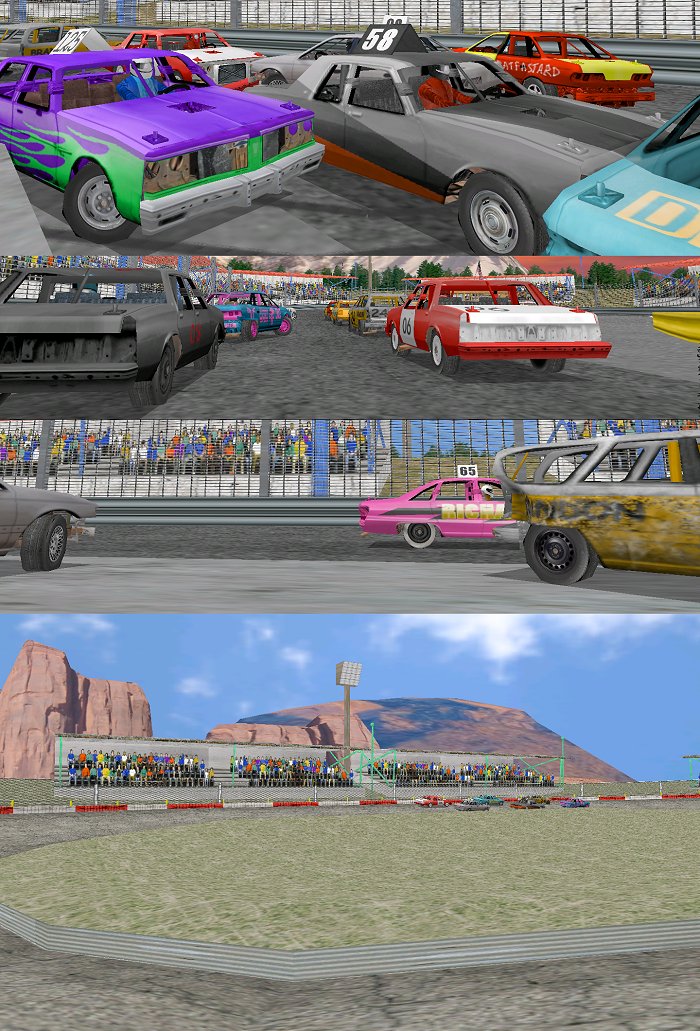 Question to anybody with experiance:

As you can see its one of the lower end cars set to apear in the first races, so far thre are 10 other cars rated 1, all of those cars apear, however this car NEVER apears in a race, it works when I play as it, and it works when forced to appear as an explicit opponent, but otherwise has never apeard ingame once, I figure by now it cant just be a coencidence since ive seen every other car multiple times, anybody know what could Possibly be causing this?
Wheels Outside All Shapes
Top

Edit: I meant to say the whole time change from day to sunset to night is brilliant. :)
MacCarpocalypse | coffey.polygonized.com | CoffeyCup's Gallery
Top
8 posts • Page 1 of 1