Back in 2010, while working on the early drafts of ideas for Carmageddon: Reincarnation, we got the news that an ex-colleague of ours – Russell Hughes, known to us all as Rusk – had passed away suddenly. He was only 37 years old. He had been working in Australia for several years and I hadn’t seen him for a long time, but (like other colleagues who had worked with him) I was reduced to tears by this news. Everyone who knew Rusk loved him. 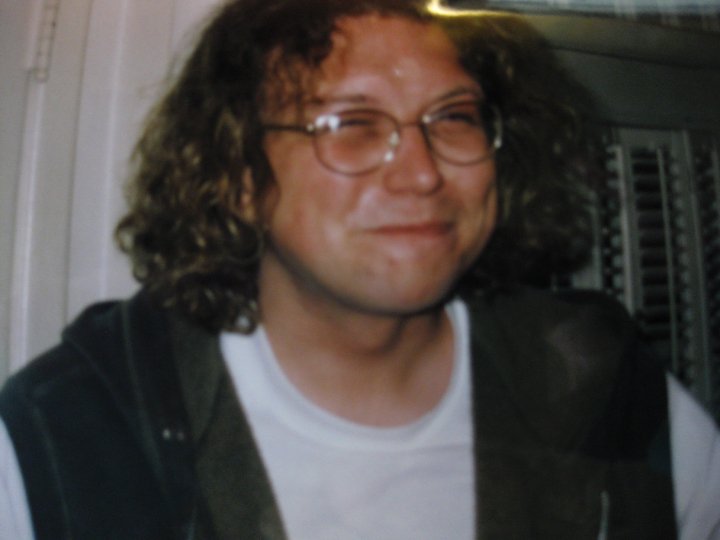 The last time we’d talked wasn’t long before. It was on the Xbox, playing Red Dead Redemption, hooning around the desert in a stagecoach, shooting up the place… I’d been planning to try to entice him back to the UK to work on the new Carmageddon, but that wasn’t going to happen until we could take on more staff. I never got the opportunity.

Rusk was our first employee, and the youngest of the original Stainless team of 8. His gaming credentials were impeccable – he loved, lived, breathed and already made games – and was already an accomplished bitmap artist. But it was his constantly grinning, happy disposition and boundless enthusiasm that got him the job as an artist on Carmageddon, as much as his artistic talent. He worked in a local pub where Patrick and family went to eat, and fell to his knees in astonishment and glee in the middle of the pub when Patrick was there for a meal and told him he’d got the job (as I’d, um, forgotten to let Rusk know!). And as his best mate (and game-dev partner) Chris said, “From that day onwards the smile never left his face, and he spent the rest of his life working in the industry he loved.”

During his time at Stainless Rusk kept us constantly amused with his wit, and his endearing daftness. Every time we went to see a film (that he’d been raving about for months), he’d fall asleep within the first ten minutes. He could sleep anywhere – often under his desk at the office. In the middle of the day. He loved animals, and they loved him. He appointed himself keeper of the pigs and chickens at our studio/farm (that’s another story) – there’s a great video taken on the day we had some new arrivals…

His “magnetic personality” wasn’t all good though, and had a negative effect on electrical goods – not ideal, in an office full of PCs and tech. PCs would just shut down as he passed by. Of course, sometimes his effect was less inexplicable. For instance, one time, he saw a nice looking lead connected to some “unimportant” sockets on the wall and (probably deciding it was a really cool colour) took it to use on his PC. For the next hour or so everybody else in the company was wondering where their network had gone...

Then there was the DeLorean. Even though he wasn’t a petrol head like the rest of us – he really didn’t know one end of a car from the other, and spent years driving a battered old Ford Escort – Rusk actually had more exotic tastes than any of us... 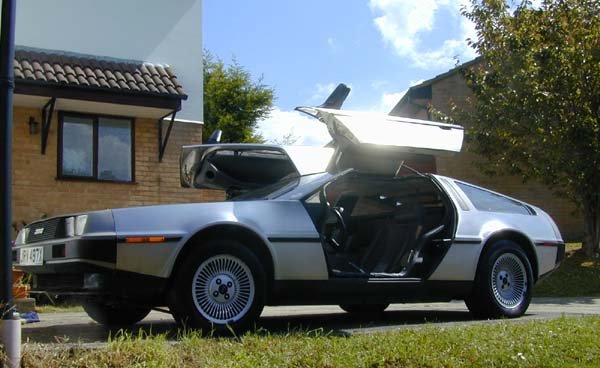 Yes, for Rusk, only a car famous for being easily converted for Time Travelling would fit the bill.

And eventually he fulfilled his dream, with the purchase of a gleaming Stainless steel DeLorean. When I say purchase, of course, Rusk didn’t actually buy the car. Mum bought the car – which had to be shipped over from Texas.

Ownership of this rare classic sportscar was approached in the usual unconventional Rusk style. He’d drive to work every day with a mug of coffee – a special mug with an extra wide base – perched on the transmission tunnel, to drink while stuck in the traffic jam on Fairlee Road. Among the DeLorean’s myriad design flaws were those amazing gull-wing doors, that were too heavy to stay up of their own accord, which would lead to the amusing sight of Rusk attempting to extricate himself (and his coffee) from the low-slung vehicle whilst trying to stop the door slamming down on his head.

Although the car soon began overheating daily, he never seemed to be sure when or even if it had been serviced. Or whether it had an MOT. I think he always considered Road Tax to be an optional extra. Gradually it fell to bits, but he carried on cheerfully coaxing it back and forth to the office with decreasing regularity, oblivious to its impending demise and instead just wallowing in its cool sci-fi movie image.

Rusk worked on designing Carmageddon (it was very collaborative, as there were just the 8 of us), plus the bitmap sprite pedestrians, other bitmap elements of the game (HUD and in-game) and texture work. He continued to work on 2D for The Splat Pack and Carmageddon 2, and stayed at Stainless beyond the Carmageddon years to work on other projects, increasing his range and moving into 3D modelling.

Of course, as well as his encyclopaedic knowledge of games, his artistic talents, and constantly giving us all the feeling that “everything will be alright”, Rusk also performed another important role for the company. He was there to egg Patrick on.

Not that Patrick ever needed much egging – but if it was so stupid that even Patrick was having second thoughts about it, then Rusk would be there, camera at the ready. So, Rusk would always be the fearless cameraman who’d get up close and lose his eyebrows, filming the antics... Antics like these:

We’ve got hours of that stuff... and all of it with the that soundtrack of Rusk’s delighted reactions to the anarchy he’s filming.

Anyway, when the studio (by this time VIS owned) closed, Rusk joined a group of guys who left the UK for Australia, to work for developer Blue Tongue. And for him, life continued as one big videogame…

Then, around five years later, after Stainless had reacquired the rights to Carmageddon and we were getting towards a point where we’d be able to get Rusk back to the Island and working on Carma again, he went and died.

So, what could we do to honour the memory of this fantastic character, colleague and friend in the new game? Clearly, the answer was to include him in the game. He’d already featured previously, along with his DeLorean, so we couldn’t just leave it at that. But Rusk had already helped us out here too – thanks to his Facebook post from some time back, when mum Ann visited and took the photo of him below, with its inspirational caption… 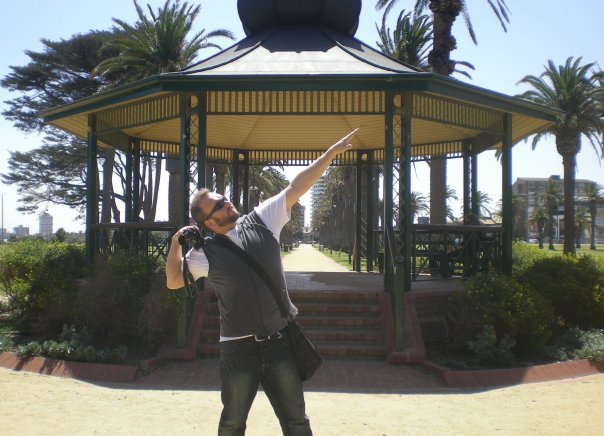 “Pretty much how I want the gold statues of me to look.”

And so that giant gold statue (modelled for us by another ex-colleague and friend of Rusk, Jon Wesgate) now resides in a suitably monumental memorial building in the Bleak City Commercial District. Why not pop by there when you’re next in town, pay your respects, pick up a bunch of cool/stupid PUps, and get back to smashing the shit out of everything. It’s what Rusk would have wanted.