Hello friends. As Econobrick did many years ago with the yellow Hawk MK1 skin, here's my attempt at restoring the textures of the red Eagle MK1 to their original resolution.

All final textures were downsized for release without proper subsampling to 64x64, a few key ones to 256x256. However some unused unfinished versions of these textures were still included in the game, like ANNBLAK.PIX for the Hawk (which Econo used to make the yellow one) or EAGBLAK EAGBLUE EAGGREE EAGWHIE and EAGYELE for the Eagle.

Oh and I also doubled the original blade resolution while I was at it, and fixed some obvious mishaps. 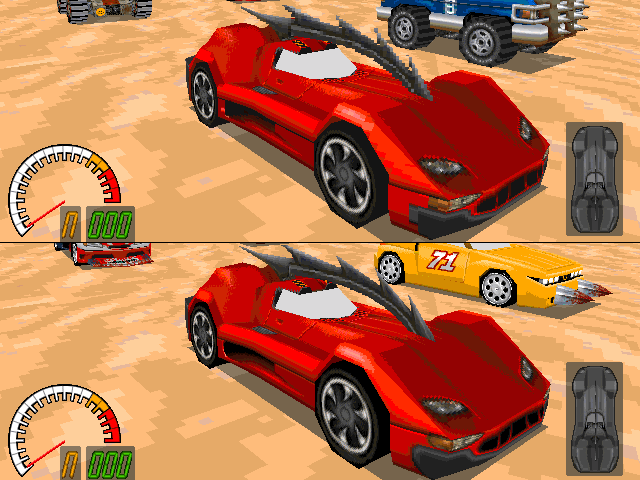 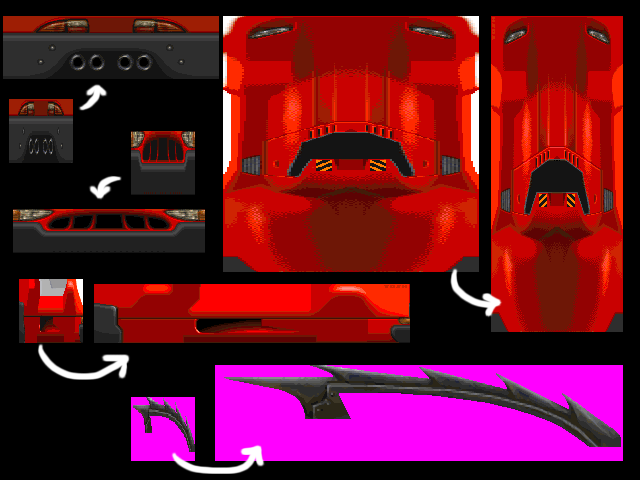 Might not be the most awesome mod, but I thought it was about time someone did it.

Uuuuh babe! It looks sexy! I love it! My OCD approves!
Top

Hah that's pretty darn cool. Too bad they had to rescale all of these. I bet all cars had pretty neat original resolutions and proportions.
Top

Hell yeah they did...

Just look at the first batch of screenshots released by SCi in '96:

The back texture of the Plow is sharp and Fraud Broko's side texture is untouched too, the 8's outline and rear light are crisp. *cries a little inside*
This bad scan can still show Twister's original side texture, we could almost read the sticker and the radioactive logo wasn't yet turned into a mess of black and white pixels. *breaks down in tears*

Wow! I really like those crispy textures! No more pixelated saw-blades!

Great work :) How this was possible to restore blade from such lo-res image?

Looking at those early pictures I focused on HUD and I only noticed one texture walls... Nice find :)
I think maybe you can spot something in the "rolling demo" video.
(as alternative Fat ped which I found in older demo version)
I think maybe they released an earlier demo somewhere, with different files...
Maybe with magazine or for display purpose...
As early Half-Life CD that someone found and now it's available as iso :)
Top

Jaw_Breaker: My take is that after seeing all their work downsized to a messy 64*64, the artists decided to work directly with 64*64 for the SP cars textures

QTZ: The blade is actually 2x bigger than the original texture (which is available in the aforementioned PIX packs). I upsized it with xBRZ method then cleaned the transparency borders. Speaking of the blade, its material seems to prevent texture filtering, even in Glide mode. Not sure, but if it's indeed something in the material, it could be very interesting for C2!

And yeah the Rolling Demo was made before all textures were shrunk down. The video alone is already a good source of material (good quality video:
It would be incredible to find a build/demo from that period (mid to late 1996 I think).

btw is timed demo you talking about? i guess not because everybody have this timed demo
Top

hazardic: Yeah you did a lot of stuff in that pack! However I'm also trying to do the same stuff on my own

I kinda did like you and Econo: color swapped one of the remaining hires unfinished textures, but then went a couple steps further by painting back the final colors basing on the downsized default textures and Hawk unfinished hires ones.

And no, not the timed demo, we meant a hypothetical earlier demo or preview alpha version that would have been sent to magazines or stuff like that. Basically, dreaming... 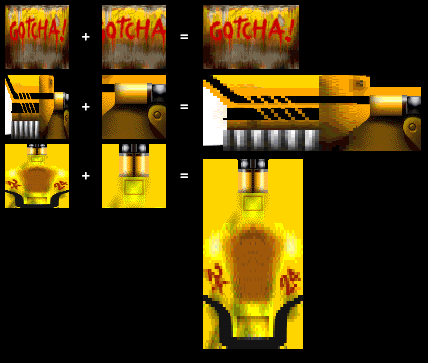 And while I'm at it, here's the unused quitting menu:

Also this whole thing reminds me of one other carmageddon game, that went from nice crisp textures to blurry mess.

From detailed animated parts of car suspension and egine to mostly static no longer animated bits either due to glitch in ?porting? or intentional optimalisation

From nice long viewdistance to fog/smog fladed maps where distant terrain and buildings start to flicker in and out of existance, becuase the boarder of rendering anything at all has been pushed so close to the camera.

From nice and cripsp reflections on metal, to blury low detail fake

yeah the vanilla textures certainly were better - cause obviously the suppressor couldn't be such a mess, cause with all these hazard stripes combined with lo-res it became a blurry hell

Yeah Suppressor and APC turned into a mess of pixels!

Another reminder of the original texture quality..! 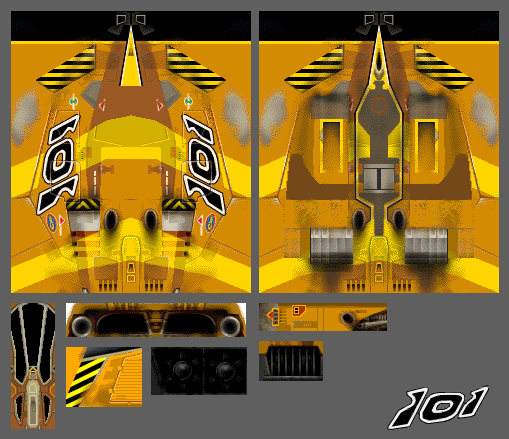 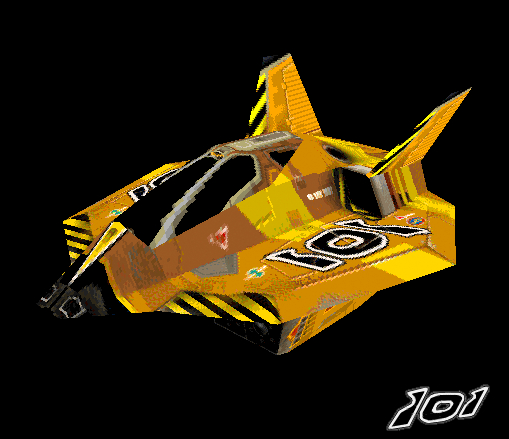 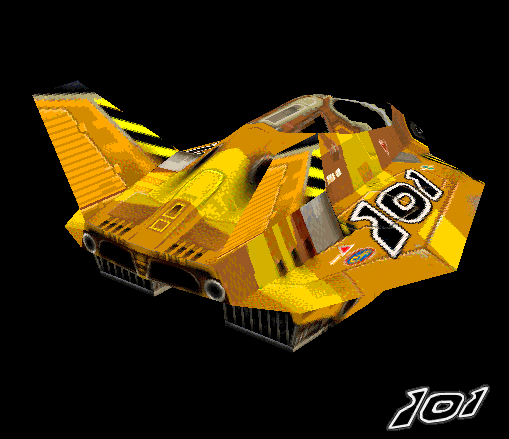 Just look at this! We could remap the top of the Suppressor with its damage inidcator and it'd still get more detail out of it! 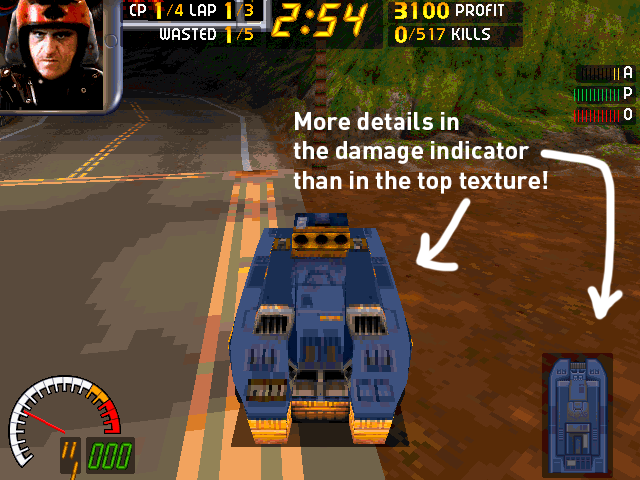 Official seal of FIX IT SCI: 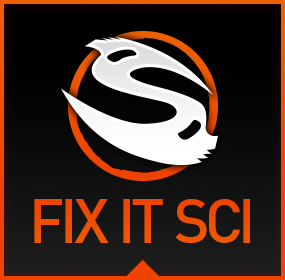 daamn.. you are toatally right! i was trying ti fix suppressor long years before cause its messy look was disturbing for me too much while being fav vehicle

why this idea didn't came to me..
anyway sup is probably the one who suffer the most from this crappy 64x resize
Top
Post Reply
16 posts • Page 1 of 1

Users browsing this forum: No registered users and 90 guests